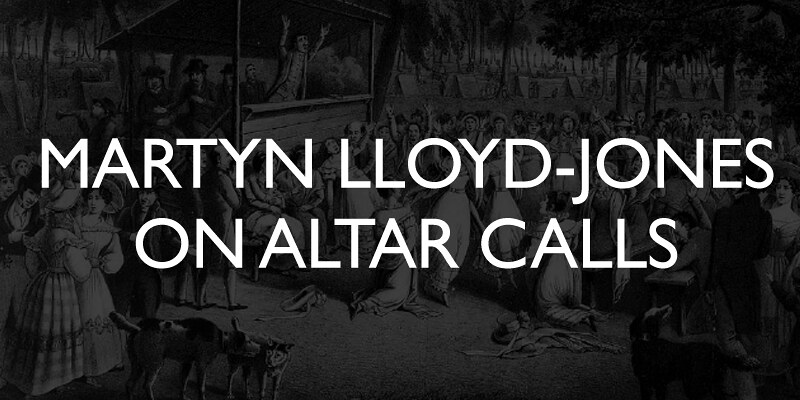 I recently finished Dr. Martyn Lloyd-Jones’ classic book Preaching & Preachers. There is no lack of talking points for the good Doctor. He is dogmatic, opinionated, and assertive about what he believes preaching to be. I found myself convicted, confirmed, and even bemused to the point of laughing out loud. The book was rich for me in all kinds of ways. For example, one interesting thing was how MLJ regarded altar calls in church services.

I grew up in a church tradition where altar calls were standard practice. And while I’ve preached many a sermon that included an altar call, for years now my church (and my preaching in it) doesn’t have them. Some believe this absence to be, at best, pastorally unwise or, at worst, incredibly unbiblical. 1 I thought it might be good to hear at least from one respected, if not hallowed, preacher on the reasons he didn’t employ them in the preaching event.

#1: It is wrong to put direct pressure on the will.

#2: The response of the man who “comes forward” isn’t so much the Truth itself as, perhaps, the personality of the evangelist, or fear, or some other kinds of psychological influence.

#3: The preaching of the Word and the call for decision shouldn’t be separated.

#4: The implication that sinners have an inherent power of decision and self-conversion.

#5: The implication that the evangelist is in a position to manipulate the Holy Spirit and His work.

#6: It tends to produce a superficial conviction of sin.

#7: You are encouraging people to think that their act of going forward somehow saves them.

#8: The implication that the Holy Spirit needs to be helped, aided, and supplemented – that the work must be hastened instead of leaving it the hands of the Spirit

#9: It raises the whole question of the doctrine of Regeneration.

#10: No sinner ever really “decides for Christ”; he flies to Christ in utter helplessness and despair as his only refuge and hope.

What is MLJ’s counsel to do en lieu of altar calls? The Doctor concludes:

The appeal must be in the Truth itself, and in the message. As you preach your sermon you should be applying it all the time, and especially, of course, at the end, when you come to the final application and to the climax. But the appeal is part of the message; it should be so inevitably. The sermon should lead men to see that this is the only thing to do. … I believe that the minister should always make an announcement in some shape or form that he is available to talk to anybody who wants to talk to him about their soul and its eternal destiny. 2

What Lloyd-Jones wants to make clear is that one doesn’t confuse not having an altar call with not having a call to respond at all. For him, the call to respond is peppered throughout the sermon. The issue at hand for the Doctor is the technique or instrument which employs altar calls for conversions. If you’d like to know more, I highly encourage you to pick up a copy to see his argumentation behind these ten reasons. If anything, it will be good food for thought for your own practices in preaching.