Periodically I get asked the question, “Yancey, what do you believe about end times?” which is often followed up with almost ecstatic rambling on issues like the conflict in the Middle East, the rapture and the latest prediction of when Christ is returning before I can even respond.  It seems that most people I encounter already know what they think but want me to reinforce their beliefs. Unfortunately, we often don’t see eye-to-eye on many different issues (When did the Rapture become a popular teaching in the Church? The 19th Century you say? Hmmmm…).

Still there are others who really are seeking to understand what God has to say about the end of the age. While you would think today would be a great season to ask that question with all the different resources dealing with eschatology (end times), the unfortunate reality is that much of it stradles the line bewteen  grandiose sensationalism and flat-out kookiness. Yes, those books make best-sellers (God help us) but they’re woefully destitute of sound teaching on eschatology. So I thought, inspired by my cousin who  sincerely asked me over the Thanksgiving holiday about the end times, I would recommend the best book I’ve ever read on the topic. 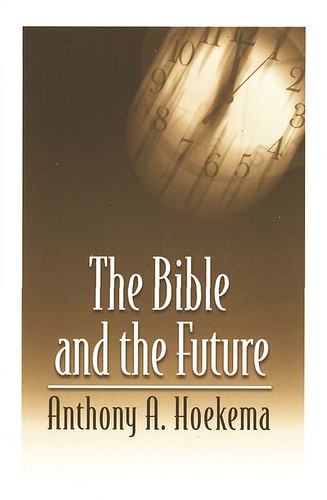 The book is The Bible and The Future by Anthony Hoekema (1913-1988), a former professor of systematic theology at Calvin Theological Seminary. I ran across this book in seminary when I got into a friendly argument with a classmate of mine who was challenging my theological assumptions about Israel and the church (i.e., Dispensationalism). Somewhere in our dialogue he recommended a chapter from Hoekema’s book that a professor had used in a class. Still convinced of my ideas after our conversation, I went to the seminary bookstore a few days later, grabbed a copy of The Bible and The Future, found the particular chapter in question and for at least half-an-hour stood in the aisle reading the entire chapter. Upon finishing I said to myself, “Wow! That was good and incredibly convincing.”

However, it wasn’t until I moved to Houston a year or so later that I bought the book and read it entirely. This time I wasn’t only astounded, I was fairly convinced. Hoekema’s biblical exegesis appeared much more sound and well-balanced than my view up to that point, and I’ve always tried to live by the principle that if you can show me that your view/position/cause is a more faithful interpretation of the biblical text then I must do what I can to change my current beliefs. The Bible and The Future did that for me. It is biblically consistent, fairly written and devoid of the insipid sensationalism that characterizes so many of today’s books on the end times. This book was catalytic in my understanding of eschatology. I recommend it often. In fact, I used to keep extra copies of it in my office to give away. It isn’t perfect but it sure is good…no matter what your eschatological disposition (premill, postmil, amill).

Now, hurry and pick up a copy before Jesus comes back.