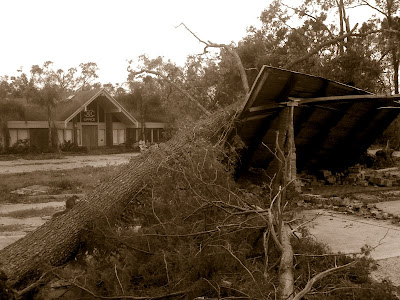 You think it would be a really cool thing to see the President of the United States flying in a helicopter until you realize he’s attempting to see the devastation of the terrain that you call home. Yup. I was back from my evacuation from Ike, standing on the grounds of my church office (see pic) with our elders surveying the damage from a much lower altitude when I saw the POTUS skirting the sky above us. I realized then and there that I wasn’t just watching the news you don’t want to be on…I was the news you don’t want to be on.

Let me begin by saying that I’ve been called, texted, Facebooked, Bloggered, et al. by friends checking in on me to see how I was doing. Thank you very much! I deeply appreciate it.

My house has sustained relatively little damage. I’ll need my roof repaired. A backyard fence has a section that has fallen. Outside of those two issues I’m free and clear. I wish I could say the same of some of my friends – silt in their living room, water lines in the five foot range, some have no homes left to go to. Driving into Houston had an eerie feeling to it as we saw a long line for FEMA’s ice, water and food “Point of Distribution” (there’s one less than a quarter mile from my house), tattered and torn signage dotting the landscape and the buzz amongst neighbors and friends with their assessments of Ike.

This won’t be a quick story with a short ending. We will have work that will last months, some maybe even more than a year. But I’m reminded of Paul’s words in 1 Corinthians 16:9, “…for a wide door for effective work has opened to me…”; I am very encouraged at the fact that I think a great door to the Gospel has been opened by the violent hands of Ike. Self-security and presumption have been trumped by 110 mph winds of an eyewall that went, literally, through my neighborhood…and the neighborhood of those I believe God has called us to reach through our local church. This may sound funny to say, but I’m excited about the future. I’m excited to see how wide the door will open for the grace of God in Christ in the Bay Area. I’m excited at how many people will decide to become Followers of Jesus or recommit to their followship of the Lord. I’m excited I get to be a part of it all by the grace of God.

And what’s even better is that I believe I have an entire church that’s feels the same way!