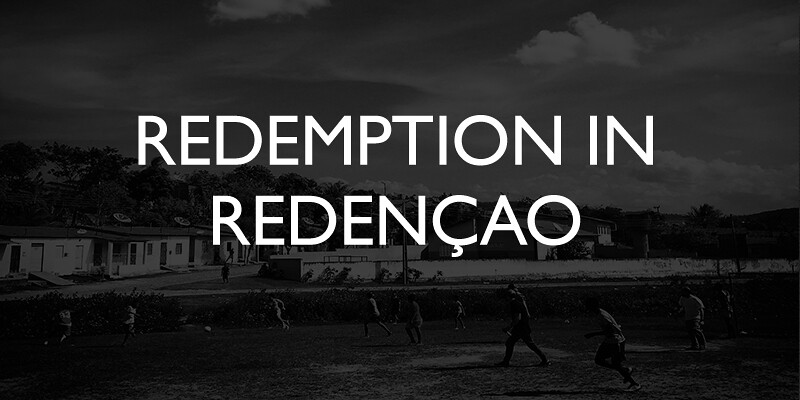 Nothing good ever happens here.

Those were the sentiments expressed by the people of Redenção, a small town in Brazil’s northeast. With drug trafficking, political corruption, abject poverty, and violence on the list of Redenção’s daily reality, it was easy to see why many believed it to be true. Even when a new church moved into the area saying it was going to be a place of truth and hope for the people, a place where children would be cared for and taught about Jesus, a place where the gospel would be known, most were skeptical. They won’t build a building here. They’ll take our children away from us. This will be a bad thing. 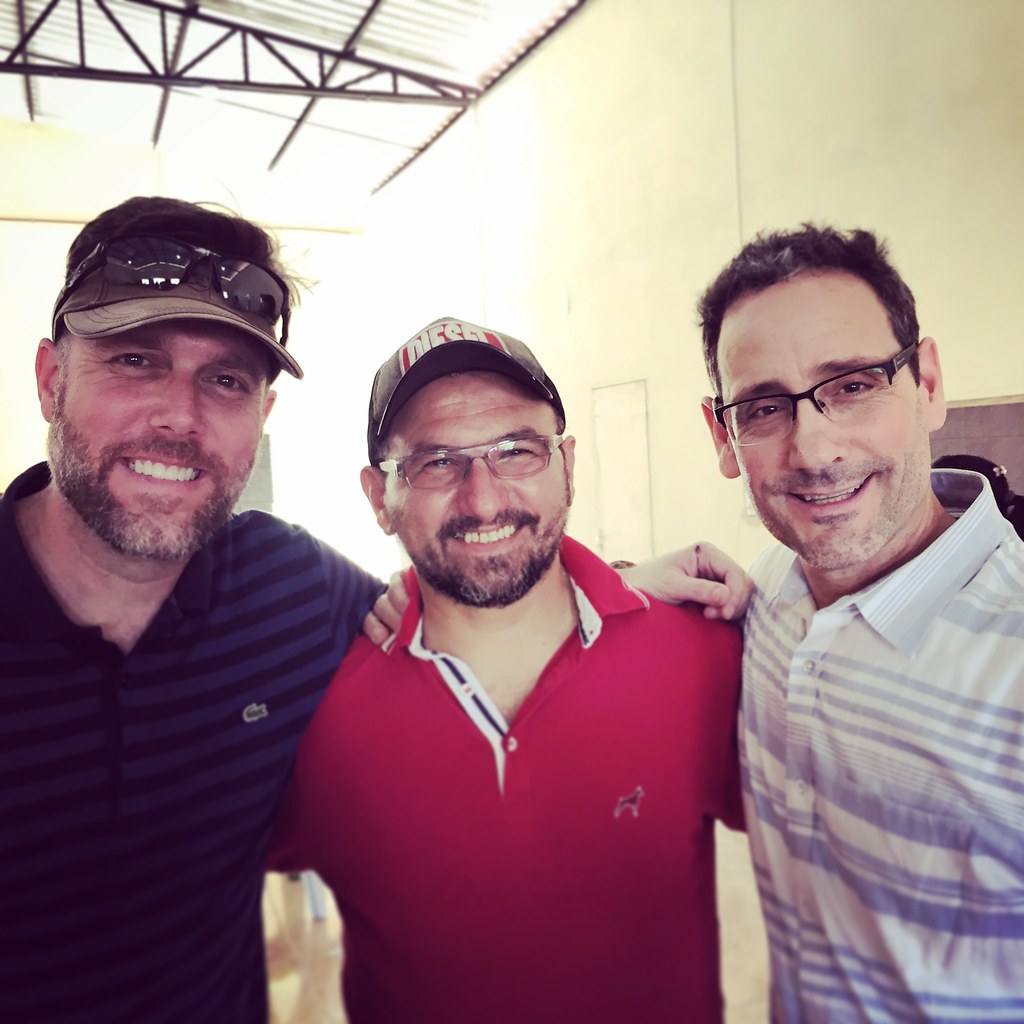 Me with Pastor Isaiah and Karl Garcia

And then Pastor Isaiah arrived. With the support of churches and organizations like Acts 29, The Church of 11:22, and Compassion International, not only was a local church established but a building constructed where families could bring their children to be cared for both physically and spiritually.

With Compassion International, I and other Acts 29 pastors had the opportunity last week to witness the Grand Opening of the church in Redenção. It filled my heart with joy to see a thriving gospel work – families were being reached, kids were ministered to, and a gospel dent was being made in the city. I was taken both by the dedication of the church to reach the city as well as Compassion’s intentionality with helping free kids from poverty. It was a powerful combination for those living in Redenção. One woman said that before the church arrived no kids would play in the streets during the day. Now they can. While much darkness still exists in Redenção, there is also light. 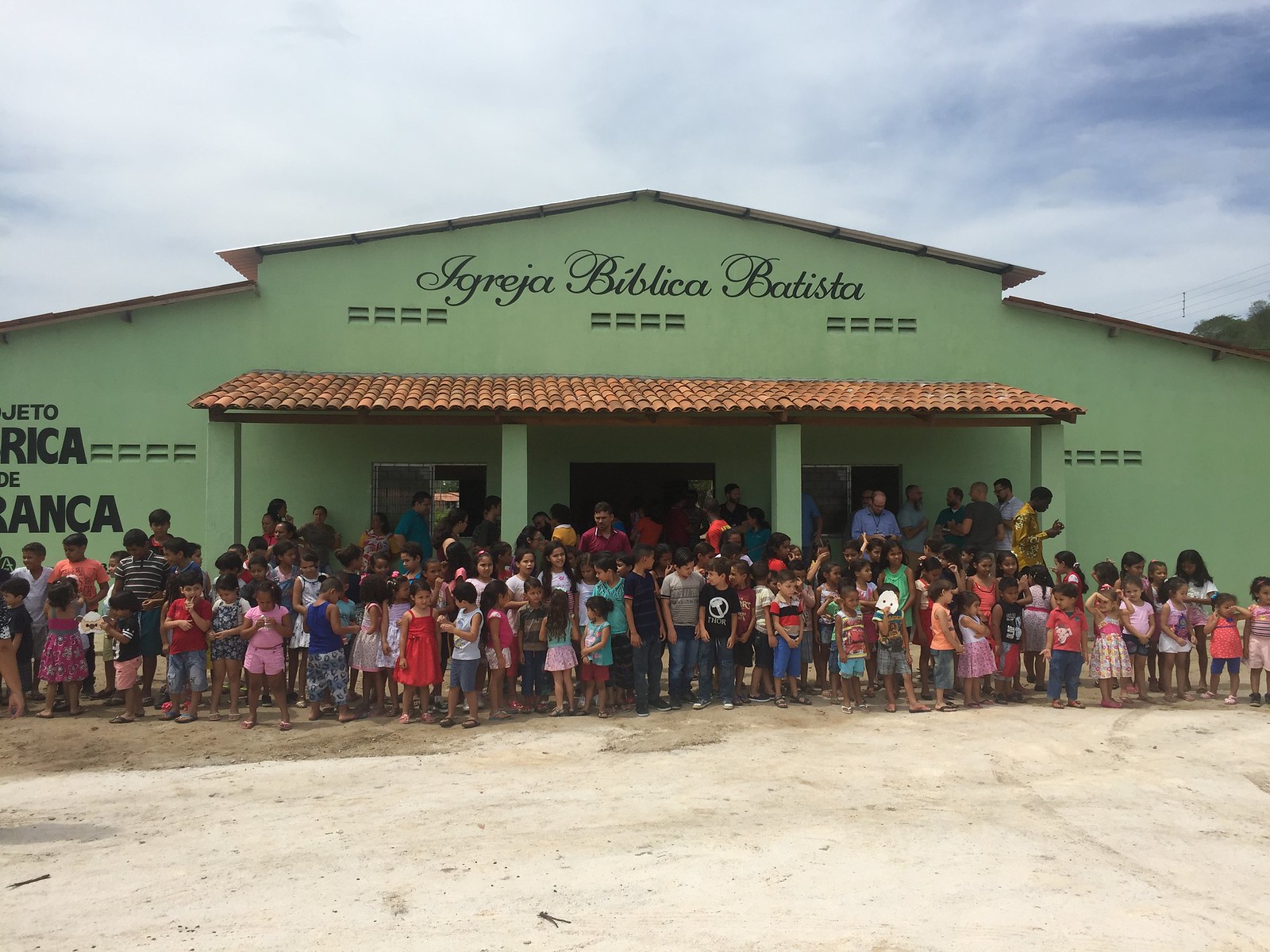 Grand Opening of the church with Compassion International’s sponsored kids

Enough light has spread that views are changing. Another lady who at first resisted the planting of the church has now begun to attend it. She’s seen the genuine love and concern of Pastor Isaiah and those who serve alongside him. She’s heard of the goodness of God’s grace in Christ. She’s tasted of what it is when God’s people are about God’s mission.  When asked about everything that’s happened she had a new tune to sing:

Wow! Something good CAN happen here!

And it wasn’t politicians, drug lords, or others in power who make promises to these poorest of people. It was Jesus. Jesus working through his local church. 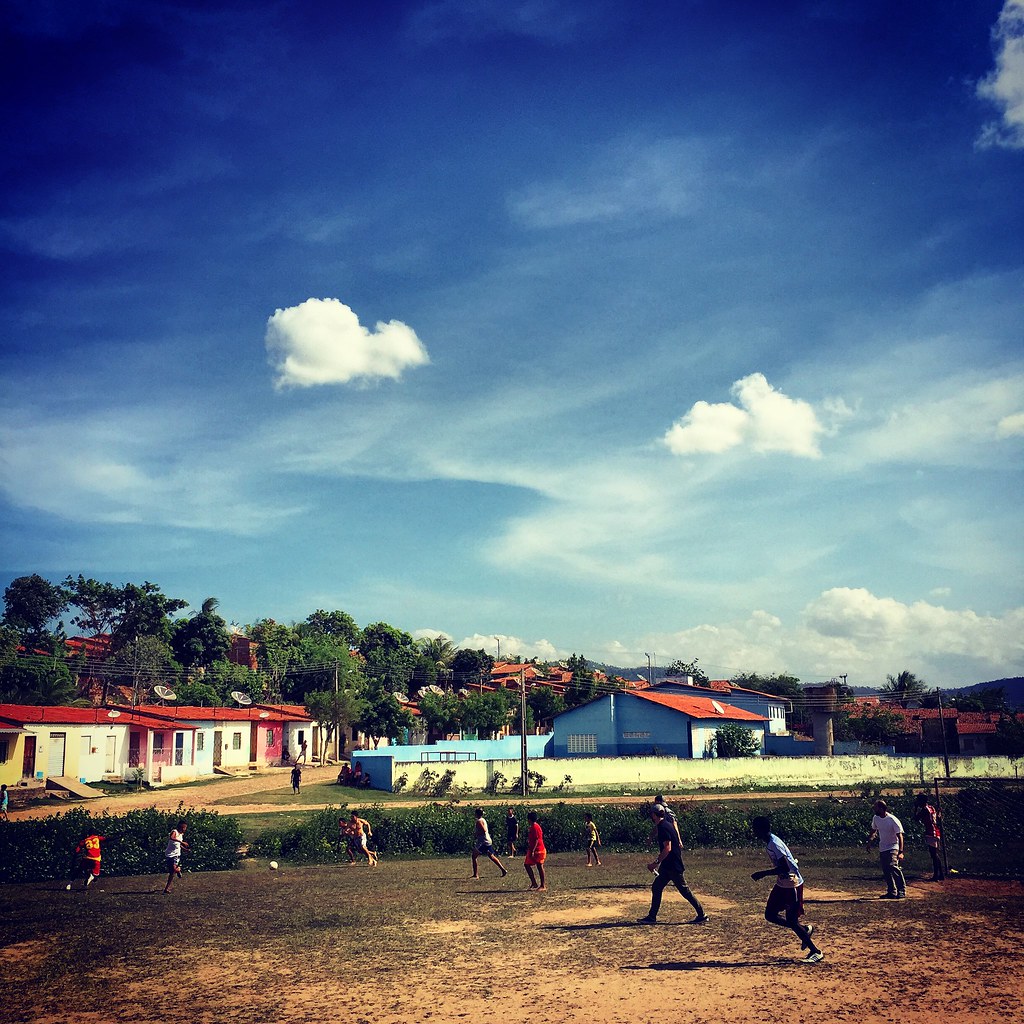 Playing futbal with the kids

How fitting. In Portuguese, Redenção means “redemption.” It was named so because it was the first place in Brazil that abolished slavery (1883). Indeed, one of the Brazilian leaders told us that the ground on which the church was built likely was a place where slaves were sold. Now, over 130 years later, it is a place where another freedom is found. Freedom from poverty. Freedom from hopelessness. Freedom in the gospel.

Good things still can happen in places where no one thinks it can because the mission of Jesus is not only alive and well but also because it’s each and every one of our calling as Christians…to those across the street or over the seas. May the world find redemption in the Redeemer!

A Brave Pastor and the Temptation of Indispensability 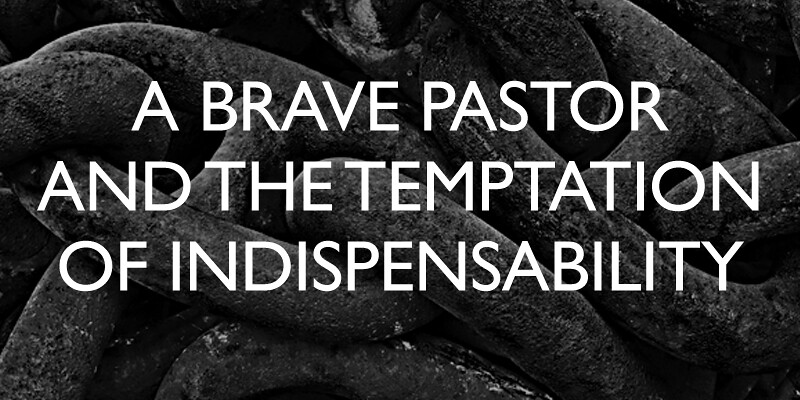 New church plants aside, it’s very easy to make the church all about the pastor by making everything revolve around his leadership.

But that’s not wanting to be a pastor. That’s wanting to be a pope. If the lead pastor gets hit by an asteroid on Monday and the church boards its doors on Sunday, the head honcho has failed. Unfortunately, many leaders who initially aim to lead gospel-centered churches often, years after planting, still find themselves a pastor-centered church.

For example, a pastor-centered church is one where you never really pass the ball of leadership to others. You make all the final calls, remind everyone the buck stops with you, and spend more time making decisions instead of developing decision-makers. You’re always working in the ministry than on the ministry. Again, it’s one thing to endure this type of pastor-centeredness when you are starting a church. Honestly, it’s likely necessary for more reasons than this post will allow. But if, over time, you’re not willing to expand the circle of leadership responsibilities to include others (and yes, this includes preaching), you may be succumbing to the temptation of indispensability.

Indispensability whispers to us that things won’t get done without our involvement. It betrays us into thinking that if we’re not in the middle of everything then somehow we’re not being a good pastor. It hamstrings our ability to entrust things to others for collective good of the church. It plays on our insecurities grinding down the health our leadership. Frankly, the feeling of indispensability bloats the ministry of a pastor to a size of idolatrous proportions. It can also alienate you from your family and your marriage.

Eph. 4:11-13, “And he gave the apostles, the prophets, the evangelists, the shepherds and teachers, to equip the saints for the work of ministry, for building up the body of Christ,  until we all attain to the unity of the faith and of the knowledge of the Son of God, to mature manhood, to the measure of the stature of the fullness of Christ”

2 Tim. 2:1-2, “You then, my child, be strengthened by the grace that is in Christ Jesus, and what you have heard from me in the presence of many witnesses entrust to faithful men who will be able to teach others also.”

which remind them that pastoral ministry is measured just as much by what you pass down to others as what you keep for yourself.

That’s one reason why my church has spent countless hours and tons of resources putting together a Leadership Development Program that keeps us in a healthy rhythm of pouring into leaders “for the work of ministry.” It’s why we make the pulpit a team endeavor, eschew personality-centered communications, and structure leadership in such a way that distributes many responsibilities of the lead pastor while still having a very real (and very fine) lead pastor.

Know this, the temptation of indispensability is very real pitfall for the heart of a pastor.

Brave ones fight against it.

A Brave Pastor and the Temptation of Cheating with the Church 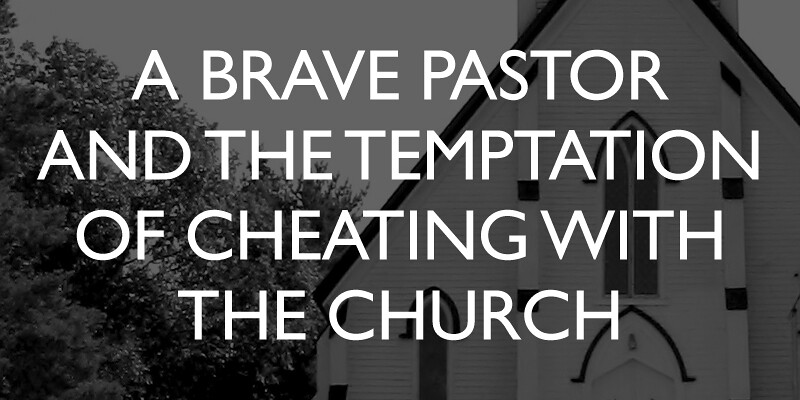 Leading the church is a demanding task. There will be times when you come home late because of the work pastoring demands. The problem is when those seasons become the norm instead of the exception, and we spend more time investing in our churches than in our families.

This temptation is easier to succumb to if we don’t center our identity in the gospel but instead in being a pastor. Now the success of our church – in its ministries, numbers, or simply how we want our congregants to view us – becomes the thing for which we live and, consequently, that which we give the bulk of our time.

It’s no secret many churches both big and small are led by unhealthy pastors who’ve made their local church a priority over and above their marriages and families. This can be especially true of church planters who work feverishly to get their local church off the ground.

But a brave pastor invests in his family. He pours into his wife, his kids. A brave pastor knows his home is the first church he pastors. That’s why one of the elder qualifications in 1 Tim. 3:4 is that “he must manage his own household well.” A healthy pastor must lead the little church (family) before he leads the big church. A brave pastor consistently fights the pull of ministry, the ache that things need to be done (by only him), and the siren’s call that tells him his identity is anchored to the “success” of his church.

Conversely, unhealthy pastors make excuses for their inattentiveness at home. They can easily guilt their spouses saying the church must have this or that from their leadership in order for things to work. They can also drop the God bomb on them: “Listen honey, this is why I’m the pastor God called to this church!” Well, who’s to argue with him when it’s put that way? To call his judgment into question is equated to lack of faith, spiritual immaturity, or flat out rebellion against God. However, let the record show this type of reasoning isn’t the sign of his spiritual greatness but his weakness, manipulation, and cowardice.

Listen men, the local church can get another pastor, but your wife has only one husband, your kids only one father.  If you’re going to cheat on someone, cheat on the idea that you have to be doing ministry/church 24/7. You don’t. Cheat on “the ministry” so you won’t cheat on your family. Make your home a priority in your schedule. Continue to date your wife. Make memories with your kids. Don’t play quality time over quantity time. Do both well. Lead your family at home so they won’t resent ministry but see it all as a blessing from God. It bears repeating. Lead your little church (family) in order to better lead your big church.

If your spouse ever says, “How come the church gets the best of you – your energy, your creativity, and your attention – but at home we get the crumbs?” You might want to consider cheating on the ministry so you can give your family what they deserve. I should know. This is what my wife said to me. And she was right. I was cheating on the wrong group.

I’ll give you one more reason not to cheat on your spouse with the church. The church is already Someone else’s Bride. That seat is filled by the Lord Christ himself (cf., Rev. 19:7-10, 2 Cor. 11:2). You play your role as pastor not Savior. Remember, your legacy as a pastor is just as defined by the family you love as the church you lead.

Brave pastors invest in their family.