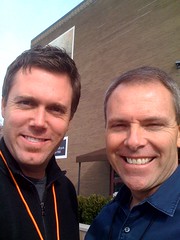 Last week I had the opportunity to travel with a couple of staff members to Louisville, Kentucky,  for the Acts 29 Network Boot Camp hosted by Sojourn Community Church. This is the third Boot Camp I’ve attended and true to form, it was a blessing to attend. Initially our team went to deepen newly-formed friendships with those in the network. My church has only been in Acts 29 for a few months, but we feel an immediate kinship with the men who follow the calling to both plant and lead churches. It is something that has been our  church’s heartbeat from the beginning, and it always energizes us to spend time with our brothers-in-arms.

For me, the best time isn’t necessarily in the sessions or breakouts (even though they are absolutely wonderful) but the conversations that happen before, between and after them. Just a sampling:

Unfortunately, we didn’t get to stay the entire time. Both Bruce and I had to lead our respective  parts in our church’s Leadership Development Process back in Houston. Nevertheless, the short amount of time was well worth it! I don’t know the next Boot Camp I’ll be able to make, but if and when I do, I trust it will be full of hope, laughter and friendship.