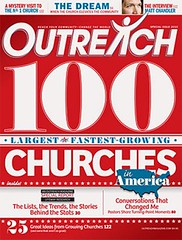 This week national news outlets have taken note of Outreach Magazine’s lists of the ‘Top 100’ largest and fastest growing churches in America. We’ve gotten quite a bit of mail due to the fact that Clear Creek Community Church is in the latter list. According to Outreach Magazine, we are the 88th fastest growing church in America. Let me be the first to say we’re a little bummed in the land of the four C’s because we really went into 2010 shooting to be the 87th fastest growing church in America. While we’re incredibly devastated about our inability to get the spot we really coveted. We promise to do our best in 2011! For now, however, I guess we’ll have to let go of some staff we think were probably holding us back from getting 87th and return to the drawing board.

All joking aside, what do we think about this list and our place on it? Frankly, we knew nothing about it. However, with people assuming what being a fast-growing megachurch means (both positive and negative, depending on what blog you read…which I found is mostly negative), I thought I’d weigh into the fray by sharing what being #88 means to me.

In the end, being #88 on a list someone printed up in a magazine about fast-growing churches really isn’t something which concerns us because it doesn’t mean anything definitively. It doesn’t tell people whether we believe the Gospel, seek to help people find God, raise up leaders for Christ, minister to the brokenness around us or that we’re committed to the mission of planting churches around the world. I believe those are more noteworthy elements for the church, but being #88…well…it just reminds me all the more that I should be about the business of things magazines usually don’t have lists for.